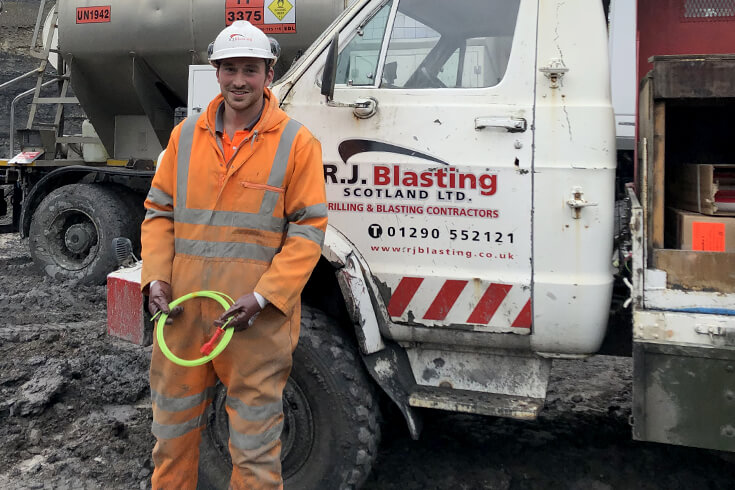 Pictured above: One of our blasting team Lee, holding Nonel wiring, standing by the ANFO truck

Pictured above: The area near to a blast is a potential safety hazard. We ensure the area is cordoned off and made as safe as possible 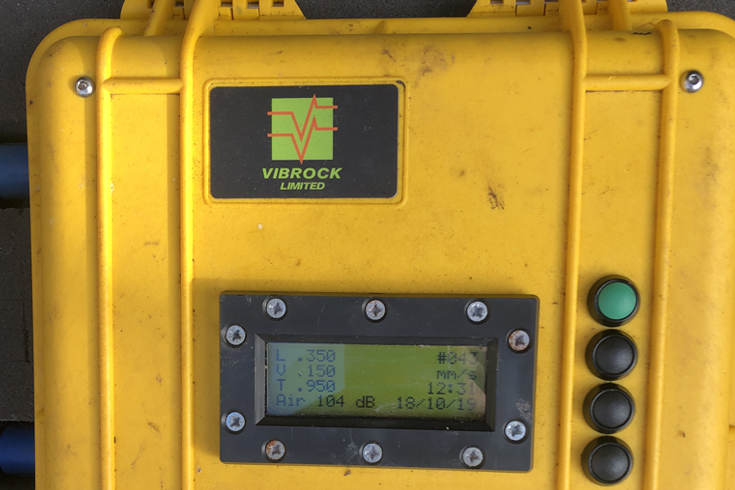 Pictured above: An example of a blasting ‘trigger’ at one of our monitoring stations 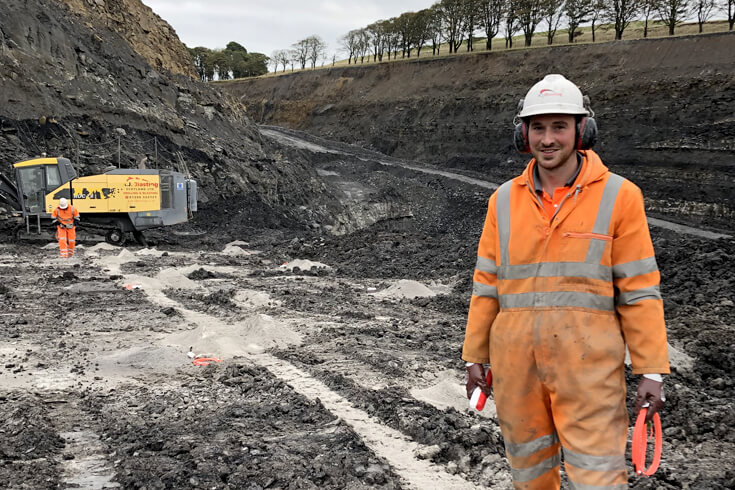 Pictured above: Lee Anderson standing by blast holes at Shotton

Recently, I visited Banks Mining’s Shotton surface coal mine in Northumberland and for the first time I witnessed a ‘blast’ from the observation cabin. This was a fascinating experience for me. I was keen to see this important part of Banks Mining operations and like many people, I was not aware of the process behind blasting and why it’ s carried out, so I thought I that would write my second blog to answer some of the questions that I had about the use of blasting on a surface coal mine.

What is blasting and why do we need to do it?
Blasting is the controlled use of explosives to fracture any hard strata of rock that may be encountered lying over and between coal seams. However, explosives are expensive, and potentially dangerous, therefore blasting is kept to the absolute minimum to ensure that the mining operation can be carried out in a safe, efficient and responsible manner. The explosive normally used in surface mining in the UK is ANFO – a mixture of ammonium nitrate and fuel oil however – this is not suitable in instances where water is encountered in the drill holes or when the strata has a high level of inherent moisture. In these instances, a waterproof blend emulsion type explosive is used.

Blasting involves drilling a sequence of holes, which are charged with explosives. The explosive in each borehole consist of a primer and a column of ANFO. The primer is a high explosive which releases a great deal of energy in a very short time which then ignites the ANFO. Blasting occurs on a series of benches or levels to enable the excavation to progress to the floor of the mining void, rather than the ‘walls’ of the excavation. Blasting creates fractures in the hard rock that makes the rock more “diggable” and gives easier access to the coal seams and fireclay below the rock that are needed as a valuable mineral resource for the many industrial and processes including steel, cement and brick manufacture.

How did blasting start?
During the industrial revolution, things were less sophisticated. Explosives were used in underground coal and metal mines. When a team of three miners reached a particularly tough wall of rock, one miner (who drew the short straw) drilled a hole into the bedrock, lit a stick of dynamite, dropped it into the hole and then ran for cover in the mine. Blasting at this time was used to enlarge the tunnels so hauling equipment could be moved round the mine rather than to loosen the rock, which was done by hand. This was a dangerous process using naked flames and uncontrolled explosions. Thankfully the process now is much more accurate and much safer.

What is the blasting process?
At Banks, safety is a top priority. We ensure that blasting is carried out in the safest, most efficient and responsible way possible. Blasting is designed and scheduled days before it is due to occur. The blasting team use a drilling rig within the void to drill holes between 115mm and 130mm in diameter.

The holes are then each prepared with the primers, ANFO or emulsion explosive and topped off with the stemming material. Each hole also has two detonators to minimise the risk of a mis-fire. The primer initiates other blasting agents. The amount of explosive detonated in each drill hole is known as the maximum instantaneous charge (MIC).

Stemming involves packing loose chippings into the blast holes to contain the energy of the blast within the rock and to minimise the release of dust and nitrogen oxide gas into the atmosphere (venting). The stemming is angular so the chippings clamp together to contain the force of the explosives into fracturing the rock. The holes are linked together with thin plastic tubing called Nonel.

Nonel is a hollow plastic tube firing a chemical impulse between detonators. The Nonel has three layers, the innermost layer is coated with an explosive compound.

When the reactive compound is ignited, it propagates a signal between holes, which travels at approximately 2,000 metres per second. Nonel is used because it is ‘non-electric’ and is safer than using an electric impulse.

Each blast must have a specification and a risk assessment for the zone of the blast. The specification is designed to deliver the safest and most effective blast possible. Blasts must have a declared exclusion zone which should extend past the planned blast area to include a further safety buffer zone. Every blast has designated marshals, situated at specific points within and around the mining void.

The marshals must ensure that all personnel are cleared from the areas they oversee, including the entrances to the void. Around the site boundary, red flags are raised to notify the public that blasting is occurring. Local residents and businesses are also notified of the planned dates and times of blasting at least 24 hours beforehand via email.

Before the blast, a warning horn sounds once five minutes beforehand, then twice one minute before the blast. It is the responsibility of the shot firer to check for misfires in every hole after the blast. Once the shot firer is satisfied it has been a successful blast he will sound the horn three times to notify all employees that the blast area is safe to enter.

How is a blast designed?
The design of a blast is hugely important to its success. The design must ensure the blast is as effective as possible and has enough delay between blast holes so the bedrock is lifted and then dropped before the next detonation- creating a wave-like effect. This design has the optimal lag time, so all the energy does not propagate through the rock at the same point and time, but instead occurs separately and sequentially in each adjacent hole, creating the maximum amount of fracture within the surrounding rock and minimising the resultant vibration. The delays between detonations of the blast holes are either 17, 25, 42 or 65 milliseconds, depending on the blast design.

How often do we blast?
At our Shotton site, we can blast up to four times a day during the week depending on the nature of the rock in the excavation area. Blasting only takes place on the hour, between 10am-4pm. However, we do not blast on weekends or national holidays.

Are there any complications?
One of the main complications in blasting can be the weather. The classic British rain interferes with blasting because it can fill the blast holes and potentially create a misfire. Water within the fissures in the rock can also make vibration propagate further, which is difficult to control. It is important to pay attention to the weather forecast before blasting to ensure the holes to not get water in, which can desensitise the ANFO. During wet weather, an emulsion is used instead of ANFO.

To minimise dust occurring from drilling and blasting, we use a great deal of dust suppression equipment. All the drilling rigs used on Banks Mining sites are fitted with collection systems or wetting systems so the drill returns are all bagged and wetted, preventing dust emissions.

What is the difference between surface mining and quarry blasting?
At our surface mines, the aim of blasting is to uplift, weaken and fracture the bedrock to enable it to be excavated more easily to give access to the coal seams. The excavators remove the fractured bedrock, exposing the coal.

In quarrying, blasting is used but the aim is to break the rock into small pieces and displace it into a rock pile rather than simply fracture it. This is because the rock is the desired product in a quarry, so the rock is broken into much smaller pieces, so it can be collected and put into a crusher. A quarry may blast between once a week and once a month.

Vibration is measured in three components: vertical, longitudinal and transverse. Our mining team can predict the peak particle velocity (PPV), measured in mm/second, of a blast using the distance away and the amount of explosive used. Using this prediction, we can then design each blast to ensure compliance with the planning conditions for the site and to minimise the environmental impact.

The planning condition limits for ground vibration and that although the limits as 95% in any six month period less than 6mm/s and 12mm/s max, we design blasts to produce vibrations of less than 3mm/s.

At all our mining sites, 95% of all blasting vibration will not go above 6mm/s peak particle velocity (PPV), with an absolute maximum of 12mm/s PPV. However, continuing with our ethos of Development with Care, we design our blasts to not exceed 3mm/s PPV. Our environmental monitoring records all vibrational events and downloads them to our software, an important part of the process.

The blast is designed so that the maximum PPV and air overpressure set by the planning conditions are never exceeded. Factors determining these levels include spacing, hole diameter and MIC. All our blasting occurs strictly in accordance with the relevant planning permissions. The monitoring results from each blast are reviewed and used to amend subsequent blast designs if necessary to ensure compliance.

Blasting can create an element of vibration, air overpressure and some localised dust. However, at Banks, limiting the effects of these factors on our neighbours is one of our top priorities. We are committed to not just complying with environmental policies and planning permissions but going further and ensuring the local communities are protected to a high level. Blasting operations are controlled by the Quarries Regulations 1999, as well as the planning permission for each site.

Our blasts are a huge part of what we do in our mining operations, so they are undertaken with care and precision. A large number of our mining staff are trained with relevant qualifications needed to oversee blasting operations and from witnessing a blast at Shotton myself, it is obvious how committed these staff members are to implementing an effective blast.

We currently sub-contract drilling and blasting to R.J Blasting (Scotland) Ltd who have over 30 years’ experience in the drilling and blasting sector and who work very closely with our site management team to ensure that every blast is specifically designed to minimise any environmental effect, whilst fracturing the most rock possible to increase the efficiency of our mining activities.

A key part of our operations, we continue to strive for success in blasting and are constantly improving our performance through innovation.

Pictured above: One of our blasting team Lee, holding Nonel wiring, standing by the ANFO truck

Pictured above: The area near to a blast is a potential safety hazard. We ensure the area is cordoned off and made as safe as possible

Pictured above: An example of a blasting ‘trigger’ at one of our monitoring stations