The play park is a resource for the whole community

Play time in Whiston thanks to park upgrade project 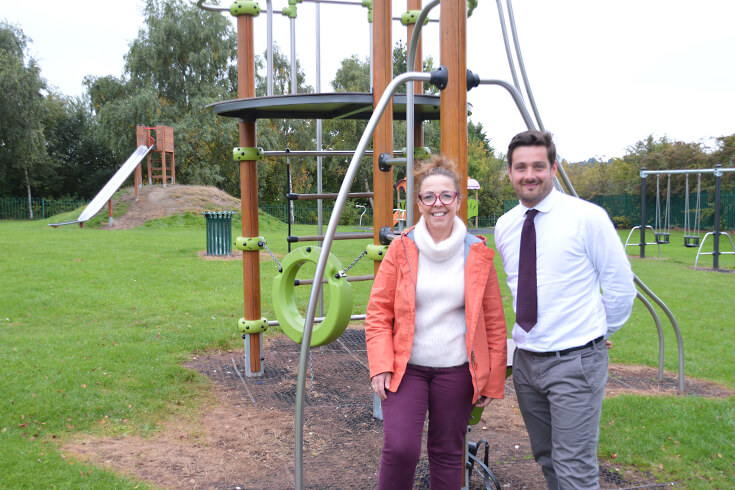 It’s play time for families in a South Yorkshire village after the installation of the final piece of equipment in its revamped play park.

Whiston Parish Council has been working towards installing modern play equipment at the village play park to replace existing items that had either become worn out over time or had had to be removed because they were in too dangerous a state to leave in place.

The Council had found around two thirds of the project cost, but was unable to afford to fund everything that they wanted to see put in place at what is the only facility of its kind in the local area.

But after renewable energy firm Banks Renewables stepped in with a £3,000 grant from the community fund linked to its nearby Penny Hill Wind Farm, the Council was able to tick everything off its play park wish list.

Improvement work has now been completed with the installation of a slide at the park, which includes specialised play equipment for both younger and older children to ensure that it’s available for use by a wide cross-section of the community.

It’s the second time that Banks Renewables has provided financial support to Whiston Parish Council from the Penny Hill fund, with a £3,000 grant given in 2015 enabling it to buy 100 new chairs for use in the village hall.

Angela Harrison, clerk to Whiston Parish Council, says: “The play park isn’t just a place where our children gather, it’s a resource for the whole community, with parents, grandparents and other friends and family members meeting there when they take their youngsters out.

“There was a lot of consultation about improvements to the play park, which was recognised by everyone as needing upgrading, and many local people told us they thought it was a real priority for the village, but because of a lack of resources, not much had been able to be done about it.

“We’d reached the point where families were stopping coming to the park because there just wasn’t enough for their children to do, so we set about looking at how we might fund the work that was required.

“We managed to find a proportion of the capital required from our own resources, but without Banks Renewables’ contribution to the project, we’d have been able to do much less much more slowly than we wanted.

“Seeing the final piece of equipment installed is really pleasing, and the feedback we’ve had from everyone so far has been terrific, so we hope kids of all ages will be getting out into the fresh air and making good use of what’s been made available.”

The fund is ring-fenced for use within the parishes of Aston, Thurcroft, Treeton, Ulley and Whiston, and aims to make a positive, long-term difference to local voluntary groups, environmental projects and community facilities in these areas.

Some of the groups that have received grants from the Penny Hill Wind Farm Community Fund in the last three years include the Rother Vale Community Band, the Maelstrom Explorer Scouts, Ulley Sailing Club, Treeton Parish Council and the Friends of Ulley Country Park.

Lewis Stokes, community relations manager at the Banks Group, adds: “The Penny Hill Wind Farm fund was designed to provide funding to help meet local community improvement priorities, and we’re very pleased to have been able to do just that at Whiston.”

The play park is a resource for the whole community